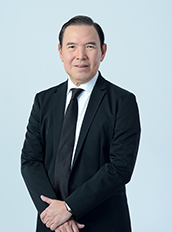 Year 2019 marks the 10th anniversary of Moong Pattana International Public Company Limited, since it was first listed in the Market Alternative Investment (MAI). It was also a challenging year as Thailand’s economy was in a slowdown compared to the previous year. The competitive environment of the industry had been intensified; an external factor, such as trade war had a great impact on the business, regardless of the government’s drives on the spending and investment, including campaigns other than the government’s welfare card scheme, e.g. Chim Shop Chai Campaign. However, private spending still decreased, due to the fact that most consumers continued to spend cautiously.

With determination to create sustainable growth and profitability for the shareholders, the Company’s Board of Directors, Management and staff had dedicated ourselves to meet the expectation of our customers, business partners, and stakeholders in order to maintain the customer base and market share in such a competitive consumer market. In 2019, the Company generated sales revenue of THB 777.59 million, equivalent to an increase of 4.7% compared to the previous year. Our net profit after the relevant calculation was THB 88.37 million (Equity Method), equivalent to 31.6%, due to the increase of operating costs and the impact from our joint venture’s reduction of profits. Nevertheless, the Company has continuously earned profits for 10 years, since it was first listed in the MAI.

Apart from our determination to create sustainable growth and profitability, the Board of Directors and the Management emphasizes the importance of the roles and responsibilities in accordance with the good governance to create sustainability and a strict compliance against fraud and corruption. In 2019, the Company received the renewed certification from the Coalition Against the Corruption (CAC). On 18 October 2010, the Company supported the organization of an activity “CSV Day” which took place at Wat Huay Lum Yai School, Nakhon Sawan Province. The activity was meant to serve the purpose of creating core value to society by emphasizing on the sustainable giving under the project name “Moong”, doing good deeds and creating future for the communities, which has been continuously developed for 4 consecutive years.

In 2019, the Company was honored to receive the SET Awards 2019 from the Stock Exchange of Thailand, for which 2 awards had been rewarded, namely “Best CEO Award” of the MAI and “Outstanding Company Perforance Award” of the MAI. Our Chief Executive Officer, Ms. Suwanna Chokdee-Anand, attended the event and received the awards on 26 November 2019.

Finally, on behalf of Moong Pattana, I would like to thank our shareholders, business partners, customers and stakeholders for always trusting and supporting the Company. I believe that the Board of Directors, the Management and our staff will continuously target to develop the sustainable value of the business with responsibility to the society, communities and environment and will everlastingly generate good performance.